Welcome to Redang island (or Pulau Redang as it is known locally).

If you've never heard of it, you're not alone. Many locals had never heard of it either until the last decade. Even today, some folks confuse it with 'rendang' (referring to a delicious local dry curry dish).

For the layman, Redang lies close to the equator, somewhere in the South China Sea off the northeast coast of Peninsular Malaysia. For GPS geeks, that's within 5°44' - 5°50' North latitude and 102°59' - 103°5' East longitude. Timezone is GMT+8. Geographically, it is located about 45km north-northeast of Kuala Terengganu (KT), the state capital of Terengganu and gateway to Redang, with the closest point on the mainland 22km away at Tanjung Merang. Close enough that on a clear day, you should be able to see the mainland from Redang.

From Merang jetty, the journey by boat takes 45-60 minutes while the journey from KT Shahbandar jetty takes about 90 minutes. Berjaya Air is the only airline that flies to Redang, offering services from Kuala Lumpur (KL) and Singapore. Redang is also within an hour's boat ride from the other popular vacation islands of Perhentian and Lang Tengah.

Hot and humid describes most days at Redang. After all, it is near the equator where daily temperatures hover between 22-33°C with relative humidity between 80-87%. There is a distinct dry and rainy season though visiting season is restricted to the dry season. The rainy season is between November and March when the northeast monsoon brings torrential rains and rough seas. All resorts are closed during the rainy season so if you're hoping to experience the kind of waves seen on Discovery Channel's Deadliest Catch, you're out of luck. Visiting season from March to October coincides with the dry season when seas are generally calm with little rain.

Photographers will be happy to note that sunrise at Redang varies between the earthly hours of 6:53am to 7:25am depending on the time of year. The sun sets between 6:50pm to 7:25pm though it's harder to catch a sunset as most resorts are located on the eastern side of the island. 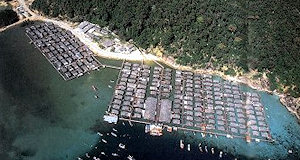 Aerial view of Kampung Air before it was torn down. Photo ©Dept.of Fisheries, Malaysia.

Islands in the Redang Marine Park.

The first settlers of Pulau Redang were believed to be the Bugis from Celebes, Indonesia. They established their first village at Teluk Kalong and later moved south to Pulau Pinang ("betel nut palm island") where the present Marine Park Centre is located. The villagers on Redang are believed to be descendents of these original Bugis settlers.

In the early 70s, when land in Pulau Pinang became scarce, some villagers moved to the Redang river estuary. The state government built a water village called Kampung Air (literally translated as 'Water Village', duh!) for these residents in 1976 which became home to about 250 fishermen families. The village comprised wooden houses built on stilts. Kampung Air was torn down in 2001 and some families relocated to the village inland while others went back to the mainland. Many of the residents have since left the fishing trade and moved into the tourism industry, running village restaurants, boat services or working in the resorts.

As a marine park, impact from human activities are managed to protect the marine environment and to conserve its coral reefs. Fishing is not allowed within the 3.2km radius while collection of all marine life including shells and corals are strictly prohibited.

The first resorts on Redang appeared around the late 80s. With the declaration of Redang as a marine park in 1991 came gradual development of more resorts to cater to local marine enthusiasts who flocked to the relatively unspoilt island to snorkel and dive. By the turn of the century, most of the existing resorts today were already operational. In 2000, with the release of the successful Hong Kong movie 'Summer Holiday', much of which was shot on Redang, the island was thrust into the international spotlight and as they say, 'the rest is history'. Nothing promotes a quiet, idyllic, unspoilt island as quickly as an international movie. What 'South Pacific' did to Tioman, 'Summer Holiday' did to Redang. Paradise lost - and I'm not referring to the poem by John Milton. The movie generated much publicity, awareness and interest both locally and overseas and sparked development of a few new resorts and expansion of existing ones to cater for the increasing number of visitors. In 2003, the Berjaya Group completed work on the airport and the first direct flights between KL and Redang commenced in March 2004, with direct flights between Singapore and Redang commencing a year later. 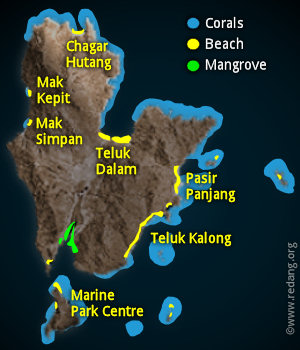 Distribution of corals, mangroves and beaches.

Redang island is about 7km long and 6km wide. Too big to walk around but small enough to reach the sea in any direction if you happen to get lost in its interior. It's highest peak, Bukit Besar, is only 359 metres above sea level. The island is made up mainly of granite and sedimentary rocks. Soil cover is generally thin and not agriculturally productive, except around the Sungei Redang (Redang river) basin and the summit of Bukit Besar.

Sandy beaches are found primarily on Teluk Kalong and Pasir Panjang in the east, Teluk Dalam and Chagar Hutang in the north, and Mak Kepit and Mak Simpan in the west. Most resorts are located at Pasir Panjang with a few at Teluk Kalong while Taaras (Berjaya Redang) is the only resort at Teluk Dalam, a bay that is so sheltered that it is hardly affected by the northeast monsoon.

The rest of the exposed coastline is dominated by rocky outcrops, steep walls and cliffs while caves and grottos cut out by wave erosion can be found in sedimentary rock areas. Some of these caves can be seen in the northeastern shore at Tanjung Gua Kawah. 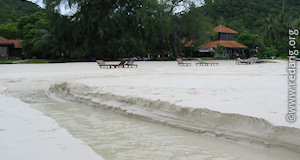 Rivers form on the beach during monsoon season. 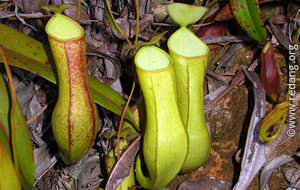 Sungei Redang, the main river, splices the island vertically in the middle and flows south, emerging opposite the Marine Park Centre. It is flanked by 2 hilly ridges and mangroves are found along the tidal reaches of its estuary and also near Teluk Dalam. During the rainy season, large quantities of water run off the thin soil cover, forming rivers that often cut across the sandy beaches into the sea. By the end of monsoon season, these dry up and disappear and the beach is restored once again.

The interior of the island is covered with thick vegetation comprising mainly dipterocarpus forests in the east, and shorea forests in the west. Coconut trees line sandy shores, while the 'sukun' or breadfruit tree is fairly abundant on Pulau Pinang. Island fauna comprise mainly small reptiles and amphibians such as snakes, monitor lizards, geckos, toads and frogs, small mammals such as macaque monkeys, bats, mousedeer, civet cats, rodents, domestic goats and sheep and more than 50 species of birds.