Dolphins and whale sharks are protected in Malaysian waters.

In Malaysia, certain terrestrial wildlife species are classified as 'totally protected' or 'protected' by federal legislation under the Malaysian Wildlife Conservation Act 2010. The act covers hunting, fishing, capturing and trading, illegal research and study, anti-cruelty clauses as well as requirements for zoo management. Some of these protected species can be found on Redang island and include the long-tailed macaque monkeys, the tokay gecko and the Malayan green whip snake.

Wildlife conservation and protection is necessary to prevent the extinction of many endangered animal species. Uncontrolled harvesting, hunting and capturing of these species for food, collection or trade, destruction of their natural habitats and food sources have meant the number of animals remaining are so few that they cannot reproduce sufficiently quickly to recover. A species is considered endangered if it appears on an official list such as the IUCN (International Union for Conservation of Nature) Red List, the CITES (Convention on International Trade in Endangered Species) Appendix, or the US-ESA (U.S. Endangered Species Act) Endangered Species list. It's possible for the status of a species to change, to become critically endangered if numbers drop below a certain threshold or drop out of the endangered list completely when their numbers increase sufficiently.

Baby green turtles are hatched naturally in Redang and returned to the sea.

It's quite common to spot a turtle in Redang. When you do, chances are it is most likely a Green or Hawksbill turtle (see the turtle identification page to lean how to recognize them). One study showed that out of a total of 7072 nests recorded at Chagar Hutang Turtle Sanctuary on Redang from 1993 to 2008, 98% were green turtle nests while only 2% were hawksbill nests. Of the 7 species of marine turtles in the world (all of which are classified as vulnerable, endangered or critically endangered according to the IUCN Red List of Threatened Species), 4 species used to come ashore and lay their eggs on Malaysian beaches. These were the Leatherback turtle, Hawksbill turtle, Green turtle and Olive Ridley turtle. The Leatherback and Hawksbill are considered critically endangered, while Green turtles are endangered and Olive Ridleys are vulnerable.

According to Dr.Chan Eng Heng, CEO of Turtle Conservation Centre in Terengganu, Malaysia, data gathered on turtle nestings in Terengganu beaches in 2010 showed that the Leatherback and Olive Ridley turtles have effectively disappeared with fewer than 5 nests per year. Even Hawksbill turtles nestings have plummeted to fewer than 20 nests per year. Only Green turtles continued to nest in any significant number with over 2000 nests per year but this still represented a 25% decline over the last 20 years.

Among the key reasons for their decline are over-harvesting and consumption of turtle eggs, destruction of their coastal habitats and nesting areas due to development, commercial fishing and poaching of turtles and inadequate protection laws and enforcement.

Now, if you eat turtle eggs, you're probably thinking that eating a few eggs can't hurt since turtles lay so many eggs. Fact is, turtles lay a lot of eggs to increase their chances of survival. Many perish along the way. Eggs are dug up and eaten by animals like monitor lizards. Newborn hatchlings are preyed upon by birds, terrestrial animals and ocean predators. The remaining survivors face threats from fishing and poaching activities. It is estimated that only 1 in every 1000 or more hatchlings survive long enough to mature and return to nest, a process which can take anywhere between 15-30 years. Their strategy for survival as a species depends on many being hatched in the hope that a few will live long enough to continue their cycle of life. So stop eating turtle eggs and you will give turtles a higher chance of survival.

Marine turtles are highly migratory ocean-going reptiles. Turtles may swim out of protected areas across maritime borders into unprotected areas where they fall prey to fishermen or poachers. Some drown or die accidentally when they are caught in fishing nets or eat litter like plastic bags. What is required are trans-frontier protection zones like the Turtle Islands Heritage Protected Area (TIHPA) at the Philippines-Sabah Turtle Islands group, the world's first trans-frontier protected area for sea turtles. The TIHPA is jointly managed by both Malaysia and Philippines and seeks to conserve the habitats and sea turtles over a large area independent of their territorial boundaries. The Turtle Islands are now Southeast Asia's single most important green turtle conservation area.

In Terengganu, turtle conservation programs are run by the following organizations.

Redang Island is home to the largest green turtle rookery in Peninsular Malaysia. SEATRU (Sea Turtle Research Unit) of UMT (University Malaysia Terengganu) conducts conservation research on nesting populations of green and hawksbill turtles at Chagar Hutang, a stretch of beach located at the northern side of Redang. SEATRU staff and volunteers ensure that eggs are incubated in-situ where the eggs are left untouched in their natural nests, protected from natural predators like monitor lizards and allowed to incubate to full-term. Since the inception of the Sea Turtle Conservation Project at Chagar Hutang in 1993, SEATRU has released about 300,000 Green turtle hatchlings and 7,000 Hawksbill turtle hatchlings back into the ocean.

Founded in May 2009 and located in Setiu, Terengganu, Turtle Conservation Centre is one of the newest organizations dedicated to turtle research and conservation, including both marine and freshwater turtles in Malaysia. They are currently running a 'Say NO to turtle eggs' campaign.

Another centre dedicated to the protection and conservation of sea turtles in Malaysia is the Ma' Daerah Turtle Sanctuary Centre, jointly run by WWF Malaysia and the Malaysian Fisheries Department. It is located between Paka and Kertih in Terengganu and is only part of a 10km stretch of green turtle nesting beach. The sanctuary is not open to the public, but you can sign up and visit as a research volunteer with the 'Weekend with the Turtles Program'. 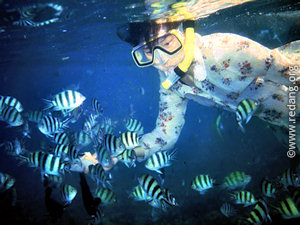 Feeding the fishes at the Marine Park Centre.

For most visitors to Redang, one of the highlights of the trip is the opportunity to feed fishes by hand. Many resorts bring their guests to the Marine Park Centre where hordes of hungry reef fish eagerly wait for snorkellers to feed them bread. It is an enjoyable and memorable experience for many and appears to be a win-win situation for both visitors and fishes.

However, the issue of fish feeding continues to be a controversial and debated issue in many parts of the world. The Marine Park Regulations in Redang do not explicitly state anything about feeding fishes. In many locations elsewhere, fish feeding is restricted or prohibited, including the Egyptian coasts of the Red Sea, many locations in Hawaii and several National Marine Sanctuaries. In the Great Barrier Reef Marine Park, shark feeding is prohibited and fish feeding is allowed but only under permit and tight restriction. The states of Florida and Hawaii in the US ban marine wildlife feeding by divers, thus terminating 'interactive diving' and commercial fish-feeding dive tours.

The arguments for and against fish feeding are presented below, though these are presented usually within the context of organized feeding of large predatory fishes like groupers and sharks which do not take place in Redang. I leave it to readers and visitors to consider the points presented and decide for themselves whether they should participate in fish-feeding activities in Redang. Given that there are merits in both arguments, perhaps a reasonable compromise is to restrict fish-feeding in Redang to the Marine Park Centre, and to permit only the feeding of food deemed suitable for consumption by the reef fishes. 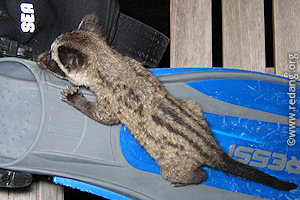 The most common animals encountered in Redang (other than bugs and creepy crawlies) are macaque monkeys, squirrels and monitor lizards. There are no large animals on Redang, and there are no legislations governing the feeding of wild animals. Just do so at your own risk but we strongly caution against feeding the monkeys (see below). Also, please remember to dispose leftover or uneaten food properly so as not to litter and attract pests.

Do not feed the wild monkeys!

Do not feed or taunt the long-tailed macaque monkeys as they can be aggressive. These monkeys are usually seen in troops at the edge of the forests surrounding the resorts and along trails. Visitors staying in garden view rooms by the edge of the forests should take care not to leave windows or balcony doors open when they leave their rooms, especially when they have food inside. Feeding them breeds boldness, causing them to venture close to resorts and humans in expectation of food, and they become a nuisance when they harass people or steal your personal belongings.