Four of the seven sea turtle species are found in Malaysian waters. The Green and Hawksbill turtles are the most common species found in Redang while the Leatherback and Olive Ridley are rarely seen these days. Learn how to identify these turtle species.

How to identify turtles 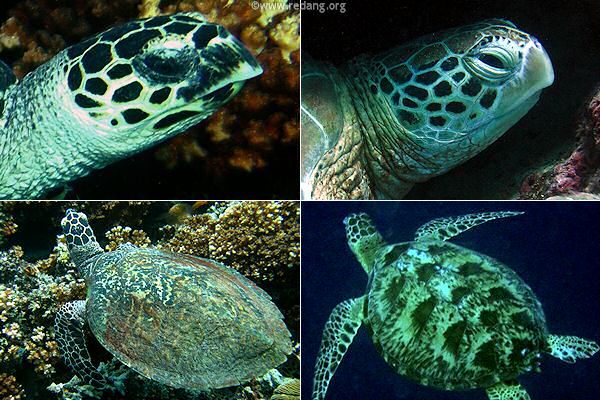 Hawksbill turtles (left) have 2 pairs of pre-frontal scales on the top of their head (the area from the nose to between the eyes). Green turtles (right) have 1 pair of pre-frontal scales. The face of the Hawksbill turtle is narrow and pointed. Its mouth resembles a bird's beak with a pronounced overbite where the upper beak protrudes further than the lower beak. The Green turtle has a more rounded face with a serrated jaw.

This colourful turtle often has pale yellow or orange spots on its dark brown carapace. In juveniles and hatchlings, the edge of the carapace has a more pronounced ragged, saw-tooth appearance. Each front and rear flipper has 2 claws (circled). It is often seen munching on coral sponges and tunicates and also feeds on squid and crustaceans, using its narrow head and beak to reach into crevices.

This turtle has a dark grayish-brown to green coloration. The shell is oval shaped and often smooth. Each flipper has one visible claw (circled). While other turtles are carnivourous, the green turtle is primarily herbivorous, using its serrated jaw to feed on sea grass and sea weeds, and sometimes on crustaceans and jellyfish.

The upper jaw of this turtle is deeply notched like the shape of a 'w' to help them catch jellyfish, their main food, tunicates and other soft marine life. These turtles nest in tropical waters but move to temperate waters to feed. Their numbers have declined so rapidly worldwide that scientists believe they may be extinct by the next decade. Only about 20,000 to 30,000 breeding females exist today.

This is the smallest of the turtle species. It has one claw on each front flipper, while the rear flipper may have one or two claws. It feeds mainly on crabs, shrimps, other crustaceans, molluscs, jellyfish, fish and seagrass.