Just a month after returning from Redang, I was back again to do my PADI Rescue Diver under S.H.Liu whom I dived with last month at Laguna. The additional survival skills would be useful especially when photographers like me often get separated and left behind while diving with non-photographers. 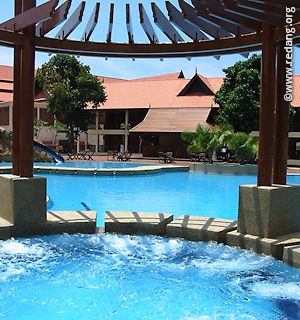 Jacuzzi at one corner of the pool.

It had only been 3 weeks since my last diving trip to Redang with Seng Hock, and I thought I was physically in quite good condition to do the course. As I learnt later, reality was usually quite different from what I thought. I managed to get Joseph to sign up for the course with me, since we usually buddied when we dived together.

Compared to the last visit, Redang was more crowded as this was a weekend. Laguna had started its tram service to ferry guests between the resort and the jetty. The resort pool and Jacuzzi had also been completed. Laguna had stopped rental of fins to snorkellers, allowing only beach boys and divers to rent them. A commendable move as this would surely help to minimize damage to the house reefs especially during low tide when the corals were in shallow water.

During this visit, I had the opportunity to observe how quickly beach conditions at Pasir Panjang seemed to change. The day we arrived, the beach was fine, the usual soft sand, and the waters calm and clear. One evening during dinnertime, there was a big storm and heavy rains and strong winds lashed the island. The following day, the beach in front of Laguna was covered with broken coral debris, not as bad as the beach near Shark Bay, but nevertheless enough to make walking barefoot uncomfortable. The usually calm sea in the sheltered Pasir Panjang bay had also turned rough, making it harder to carry out some of our rescue procedures and churning up sediment, decreasing visibility underwater in Pasir Panjang and at Teluk Bakau. While swimming out to retrieve a floating plastic bread wrapper at the jetty, I noticed the visibility was almost down to zero. Needless to say, I was also irked by the fact that people were still discarding plastic bags in the sea despite the fact that there is now a large marine park regulations signboard at the jetty area.

Feeding frenzy and romance on a rock 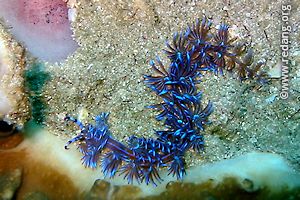 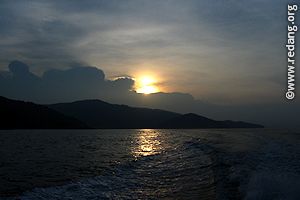 During our leisure dives, we had the opportunity to see adult black-tip sharks at Pulau Paku Kecil and Pulau Lima. 2 dive trips were particularly memorable. Near the southern tip of Pulau Lima (the smallest of the 5 rocks), we chanced upon a feeding frenzy. A fairly large school of yellow-tail fusiliers were being attacked by 2 big-eye trevallies, a couple of jacks, 2 giant groupers and an adult black-tip shark. It was like watching Animal Planet unfolding before our very eyes and we had front-row seats!

Another occasion at Chek Isa, Joseph and I came across this small rock that had many nudibranch of the same species. Many pairs were entwined, while others were looking for mating partners. We decided to play matchmaker by introducing a single nudibranch to another, and they proceeded almost immediately to mate. Romantic? Not really, since nudibranchs are hermaphrodites (they can function as male or female) but are always male when they mate...

Spending so much time at the dive centre also provided opportunities to appreciate the terrestrial life on Redang. The dive centre was surrounded by forest and that meant frequent visits by their inhabitants. I was impressed with a wall-climbing tree frog that would jump from one wall face to another adjacent face to hunt insects. It's sure-footedness would put Spiderman to shame! Not too far away were 2 different types of praying mantis hunting prey.

In the day, different types of geckos and skinks could be seen, while squirrels were a common sight all over scurrying on trees, rooftops and wooden beams. One day, there were macaque monkeys rummaging through the dive centre's garbage bag, and one even made off into the trees with Hitomi's plastic container box.

By the time we left Redang, we had completed 7 leisure dives in addition to all the rescue drills, watched the PADI Rescue course video, read the course manual, performed CPR on a dummy and sat for the theory test. It was well worth the time and effort considering we learnt a lot of useful skills that might come in handy one day. I also learnt about my fitness level, or rather, the lack of it - well, I could excuse myself because the strong surf made rescue more difficult or perhaps I should have picked a lighter buddy (actually I gave Joseph more problems in that area) but then real rescue situations might be worse. Exhaustion took its toll when I came down with a fever the next day upon my return to Singapore, no doubt contributed largely by the roadside durian feast we had on our way back from Merang to Kuala Terengganu. We had almost 10 durians between the 4 of us! I happen to be one of those people who like durians but can't take too much of this 'heaty' fruit.