Pulau Tenggol lies 30km off Dungun town, which is about 70km south of Kuala Terengganu. Seas here can be rough but experienced divers will find pristine corals and marine life in its spectacular sunken cliffs.

Barely a month after returning from Redang, I was now on my way back to KT with Seng Hock and Joseph, this time headed for Tenggol, an island known mainly to divers, the locals around Dungun and folks working in the oil refineries around Kerteh. As it wasn't as well known, Tenggol remains one of the last unspoilt islands off the east coast of Peninsular Malaysia, untouched by commercial development. It was reputed to be one of the better dive spots in Peninsular Malaysia with unspoilt, pristine coral reefs, famous for its strong currents and challenging dives more suited for experienced divers.

Tenggol is a small island, about 3km by 2km in size and located less than about 45 minutes away by speedboat from Dungun jetty. Some Vietnamese 'boat people' or refugees fleeing their country in the 70s and 80s found refuge in Tenggol but were eventually discovered by local authorities and sent to Bidong instead. Traces of their arrival can still be found on Bidong today.

Having switched from my Sea & Sea underwater film camera to a Canon A40 digital camera with underwater housing, I was eager to try it out while at the same time check out Tenggol as an alternative to Redang for a family vacation.

We had booked our tickets late and only managed to get seats on the 7:30pm Transnasional coach to Kota Bahru which would arrive in Dungun (the town of departure for Tenggol) at the unearthly hour of 4 am. We decided we would rest longer on the coach and get off at KT instead, then have breakfast with Seng Hock's brother, Seng Lip, in KT before catching the Ping Anchorage van to Dungun.

We arrived in KT at 4:30am, a half hour earlier than expected. The coach driver must have skipped a stop along the way. The Ping Anchorage van arrived at 5am to send us to Seng Lip's house. During breakfast, we were joined by Alex Lee, owner of Ping Anchorage, who lived in the same neighbourhood.

When the Ping Anchorage van showed up later to transfer us to Dungun, we were surprised to see Wah Chai and pleased to learn he would also be accompanying us on this dive trip together with his friend Kon Wah, whom we picked up along the way to Dungun. An hour later, we arrived at Tenggol Aqua Resort's office. We left our baggage there while we went to explore the small, sleepy laid-back town of Dungun on foot. This being a Friday (a weekend in Terengganu), most shops were closed. We visited the local fish market instead where we could see the fresh catch of the day which included groupers, jacks, snappers, fusiliers, squids and rays. We ended our little tour at the jetty which was just in front of the fish market and waited for our baggage to arrive before boarding the speedboat to Tenggol.

The small speedboat had a canopy with open sides and was powered by twin 90-horsepower engines that took us across the choppy seas to Tenggol in about an hour. The ride was bumpy and we were drenched with sea-spray by the time we pulled into the calm bay of Teluk Air Tawar where Tenggol Aqua Resort was located, together with 2 other smaller resorts. As there was no jetty, we did a water landing.

This is a family-run resort with 20 rooms in a mix of cozy timber chalets and bungalows, and was the largest of the island's 3 resorts at Teluk Air Tawar. We were the only guests that day, and were joined by only a few others the next 2 days, so we had a peaceful, quiet stay at Tenggol. We were met on arrival by Razak, one of the brothers running the resort who was also the resident dive instructor and dive master. The 5 of us checked into beachfront chalets #11 and 12. The air-con quad-room with 2 single beds and a double-bed was simple but comfortable and the attached bathroom had a hot water heater. The electric generator was shut down daily between 10 in the morning till late afternoon, so we could only recharge batteries for equipment at night. It was possible for our mobile phones to get a weak to moderate signal while on the island.

After checking in, we set out on our first dive to nearby Tanjung Gemuk with Razak as our divemaster. The visibility was poorer than expected at about 7-9m, and throughout the rest of our stay didn't improve further. We were told that sea conditions had been quite rough the last few weeks, and that must have stirred up sediment. Even then, we were impressed with the healthy state of the corals. The coral-encrusted walls at Tanjung Gemuk was a nudibranch haven, with many species spotted.

After the dive, we returned for lunch at the dining hall. Since we were the only guests, food was served to our table instead of the usual buffet style layout. The food was tasty, with the Indonesian chef churning out local and Indonesian-style dishes.

After a short siesta, we set off for Gua Rajawali, led by Roderick. Visibility was worse than our earlier dive, and Joseph and I got separated from the group when we stopped to photograph nudibranches. After waiting for a few minutes, Roderick finally located us and reunited us with the group which had gone after a large marble ray resting at the bottom of a pinnacle. The ray decided it didn't like our company and took off. A missed photo opportunity, but at least we got to admire this beautiful creature whose wingspan measured around 4 feet. 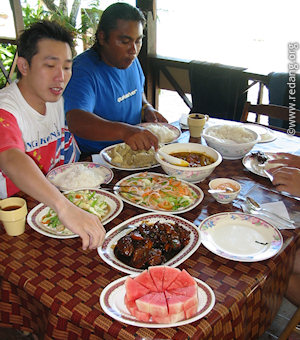 Lunch at the resort.

Lobsters under a rock.

Breakfast was delicious but I decided to have a light meal as we were having our first dive at Tanjung Sarang Lang on the opposite side of the island soon after. Good thing too - the sea was quite rough this morning and our speedboat was constantly buffeted by metre-high swells. Razak led us on the dive which was also our deepest dive in Tenggol, around 29 metres (96 feet). We encountered a school of bumphead parrotfish, a large cowrie shell and what must be the highlight of this dive, 5 lobsters hiding under some rocks.

Coming up after the dive proved to be more challenging than going in as we were bobbing up and down in the choppy sea while waiting for the boat to navigate itself close to us. In the end, the boat had to toss out a line for us to pull ourselves in. While trying to climb up the ladder, I was smashed against the side of the boat by the waves, a rather unpleasant experience. It was a relief for all of us to get back onto the boat, but the journey back took longer than expected as the boat had occasional engine trouble which meant spending more time in the choppy sea. My head was throbbing with a bad headache and I felt like throwing up.

Finally we reached the calm bay of Teluk Air Tawar without sharing my breakfast with the fishes. With such rough sea conditions, I wasn't as enthusiastic about our next dive just under 2 hours away.

With Razak leading us for the next dive, we headed for the calmer waters of Rajawali Reef. This turned out to be my favourite spot as it offered a very relaxed dive amidst pretty soft and hard coral gardens to a maximum depth of 27 metres. There were plenty of colourful nudibranches here, as well as some cowrie and triton shells.

Feeling much better after this dive, Reynolds took over from Razak to bring us out to Moonraker, one of the dive spots at Pulau Nyireh nearby. The sea here was rougher than at Rajawali Reef, with a gentle current just below the surface of the water. As with every site we had visited so far, this place was also full of nudibranch. Chloe, a leisure diver who had arrived earlier in the day, joined our group for this dive. Joseph had to sit out this dive as he had snagged his spare regulator on the boat's handrail, which ripped off as he backflipped into the water.

Returning to Teluk Air Tawar, Joseph and I snorkeled around the housereef. There were a lot of sea jellies floating about - fortunately these were not stingers. There were 2 fishing trawlers moored in the bay, and we were told that they were taking refuge from the rough seas outside of the bay. Going out from the beach, the water was fairly shallow until around 50m from shore when the bottom sloped away quickly to about 18m. This drop-off was easy to spot from the surface since the emerald green colour of the water suddenly gave way to deep blue waters. The housereef comprised mainly hard coral and the usual coral fishes.

After dinner, some of us went for a night beach dive. I decided to skip it as there weren't enough torchlights to go around (I had lent mine to Seng Hock) and I had enough diving for the day.

For our last dive this morning, Reynolds brought us back to Tanjung Gemuk as sea conditions had worsened and Razak wasn't comfortable with us going out to the other dive sites. Just as well for it seemed the nudibranches were on parade today - there were so many that I actually tired of looking at them, and only tried to look for new species that I hadn't photographed earlier.

Rough sea conditions delayed our trip back to the mainland, and we finally arrived back in Tenggol Aqua's office in Dungun past 2pm, dripping wet from the sea-spray again. After a brief meeting with Abdul Mutalib, Razak's brother, at Tenggol Aqua's office, we left for KT, stopping for lunch along the way. Later that night, we caught the night coach home.

We had each logged between 6-8 excellent dives in our short 3D/2N vacation and I captured about 12 species of nudibranch, not counting colour variations. The friendly staff at Tenggol Aqua Resort and the good food also contributed to a memorable vacation though it would have been much better had the rental dive equipment been in better condition and better maintained. Tenggol certainly lives up to its reputation as one of the best dive sites and is worth visiting if one doesn't mind the rough seas. As a snorkelling and family destination, it has less to offer compared to Redang but is certainly quieter and less crowded.

As for the Canon A40 digital camera with underwater housing, it passed the test with flying colours - good image quality, excellent features and superb battery life which easily lasted through a whole day of diving without replacing the batteries.