Michael Tan at Berjaya recently informed me about the launch of the first Biorock project in Malaysia at Tekek Bay in Tioman. The project is part of the MNS (Malaysian Nature Society's) coral reef rehabilitation project on Tioman, and is done in collaboration with Berjaya Cares Foundation. The Biorock mineral accretion process passes low voltage electricity through conductive metal structures placed underwater to deposit minerals such as calcium carbonate (limestone) on those structures through electrolysis of the sea water. Corals are then transplanted onto these limestone structures onto which they bond naturally and reproduce. Since the process deposits limestone at a much faster rate, they act as a catalyst to accelerate the growth of corals while enabling them to be more resilient to ocean acidification, eutrophication and warmer ocean temperatures. Many Biorock projects around the world have demonstrated that corals grown on Biorock structures are more likely to survive under these conditions compared to those that grow naturally. This is an exciting development and I hope that the success at Tioman will spur more widespread adoption of this process for rehabilitating damaged coral reefs.

In the same news article, it also mentioned that Berjaya had signed a corporate pledge to support the 'Finished with Fins' campaign run by Shark Savers. As a result, they will no longer be serving sharks fins in all of their 18 hotels and resorts worldwide. This is similar to action taken by Shangri-la Hotels and Resorts earlier this year to stop serving sharks fins in all their properties worldwide. Around the same time, Singapore's NTUC Fairprice supermarket chain and Carrefour Singapore also pulled shark's fins products off their shelves, following a similar move by Cold Storage supermarket last year to offer only sustainable seafood recommended by the WWF. There is a WWF list of hotels and restaurants in Singapore that have committed to not serving shark fins if you want to show your support.

It is encouraging to hear large corporations like Berjaya taking concrete steps to support marine conservation. They have the combined muscle to effectively make a difference, both in educating consumers and customers and more importantly, encourage other corporations to make the same stand, giving marine conservation efforts the much-needed momentum to progress faster and further. Kudos to Berjaya!

Just back from Anilao 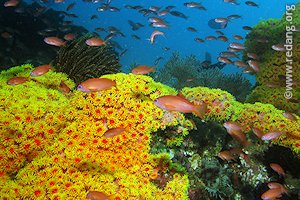 I just returned from my second dive trip to Anilao about a fortnight ago. Though conditions weren't as good compared to my first trip there 3 years ago, with frequent rain and visibility below average, it was still an enjoyable trip and we were privileged to witness some spectacular underwater soft coral gardens. You can read the trip diary for more details or just browse through the trip photos.

We're now entering the last 2 months of visiting season 2012 in Redang before monsoon season begins. We had intended to visit as a family but it looks like we'll have to postpone our visit till next year. Until then, we'll have to rely on information updates from other visitors. If you have a piece of information you like to see updated in this site, drop us an email.

It appears that Sari Pacifica resort at Redang has ceased operations. A check with their website appears to confirm this as their Redang resort is no longer listed among their resort locations. It is not clear if this is just temporary or whether there's going to be a change of owners or management but it's not surprising given the numerous teething problems and the less-than-flattering TripAdvisor reviews they've had since they opened. 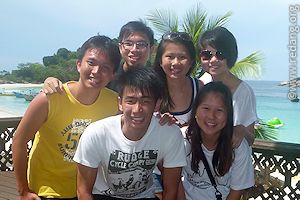 Sarah and her friends at Laguna.

Our daughter Sarah managed to make a trip to Redang last month in May with her university friends and reported that Redang Beach Resort is building new extensions to their resort on the piece of vacant land next to Laguna Redang as the pictures below show. These comprise both double storey and single storey units. The construction doesn't affect their existing accommodation blocks so it's business as usual.

Float island in the waters at southern Pasir Panjang.

For those who are easily bored, there are some inflatable recreational toys in the waters called Float Island in front of Laguna which offer paying guests some splash fun. Not sure how fun it is but to me, the colourful plastics look more like an eyesore that's completely out of place with the otherwise beautiful, natural seascape. Let's hope this isn't the start of the 'disney-fication' of Redang! 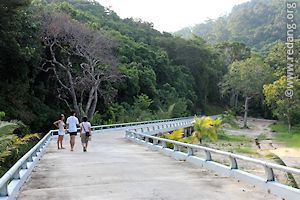 After numerous delays, we're finally glad to introduce this new revamped website. It's taken a lot longer than planned, but we hope you enjoy the new look and hopefully also find it easier to read and navigate. All the information has also been updated for 2012. There's more pictures in larger sizes with a completely new Gallery section which uses the Fancybox lightbox tools. In the Resorts page, we've also added links to TripAdvisor reviews since we don't actually review resorts here.

Part of the reason for the lack of updates over the last year has simply been the fact we have not visited Redang for sometime. That changed when we finally managed a visit in July last year after an absence of about 2 years (see our Redang 2011 trip diary). We found that much of the physical beauty of Redang remained unchanged but the social mix of visitors had changed considerably with large numbers from one particular country, who brought with them their own brand of social habits and behaviour which sometimes didn't go down too well with other guests.

Two resorts have also rebranded themselves. Berjaya Redang now goes by the new name of Taaras Beach & Spa Resort. Wisana Resort appears to have upgraded and now call themselves Amannaggapa Resort, which is not just a lot harder to spell correctly but is quite a mouthful to pronounce compared to the old name. We also visited Sari Pacifica which had opened for business during our absence from Redang, and found it pleasant though service could be improved greatly. Redang Pelangi Resort now manages and runs Ayu Mayang resort located next door. Redang Beach Resort had expanded with new guest rooms built next to Laguna. Redang Bay had moved their cafeteria upstairs, with the ground floor converted to recreational space.

A new 1.5km road that runs from Laguna's jetty behind all the resorts on Pasir Panjang now provides resorts with a means of transporting visitors and supplies without going through the beach, while allowing visitors to walk or jog from one end of Pasir Panjang to the other without getting sand in their shoes.

Berjaya Air has started operating their new ATR-72 aircraft to Redang while Firefly has stopped flying the Singapore to Kuala Terengganu route, so visitors from Singapore will find it less convenient to fly.

Corals, particularly those in the shallow reef areas such as around Kerengga and the housereefs at Shark Bay and Tanjung Mak Cantik, continue to disappear with more dead or dying coral observed. Perhaps the increase in ocean temperatures in 2010 which led to some snorkelling sites in Redang closed to visitors may have been a particularly large contributor, causing corals to bleach and die. The large number of visitors and snorkellers have also no doubt contributed to their demise, especially when irresponsible visitors step or trample on coral, ignoring snorkelling guides who tell them to get off which we personally witnessed a number of times. With every visit, we see coral reefs that are a shadow of what they used to be. On the bright side, we did observe many baby black tip sharks in the waters in front of Redang Kalong Resort, reminding us of what Shark Bay used to be. 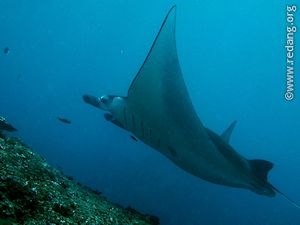 3 new trip diaries have been added to the Diary section.

Tango joined me and my regular group of divers to Bali in Sep 2010 for some fantastic diving in Tulamben and Nusa Penida where we encountered manta rays but failed to see a single mola-mola (sunfish) despite shivering in the cold waters in Crystal Bay.

Then just before university term began for Timothy and Sarah, my family and I went off to Redang in July 2011 after an absence of 2 years. It was a trip that left me a little disappointed both above and under the water.

Finally, after more than a year of staying above water, I finally donned my scuba gear again and took the plunge over the New Year in Dauin in Dec 2011 in Negros Oriental, Philippines. We did muck dives around Dauin, enjoyed the pristine corals around Apo island and encountered my first whalesharks at Oslob, near Sumilon island in Cebu. It was a fantastic way to end 2011, especially since we encountered not one, but three whalesharks ranging in length from 3m to 8m at touching distances. I was truly awed by these gentle giants.